The first reading begins, Beloved: Who is the liar? Whoever denies that Jesus is the Christ. John seems to be thinking of someone in particular who had strayed from the truth about Christ. This was not uncommon; the early Church was plagued with heretics whose theories about Jesus ran the gamut, from the Ebionites who believed that Jesus was not divine at all, to the Docetists who believed that Jesus was only divine and merely pretended to be human for our sake.

In the 4th century, one particular heresy took center stage. It was popularized by a priest named Arius, who used Scripture to teach that Jesus, although as close to divine as a human being could be, wasn’t actually divine; he was a creature and therefore less than God. The heresy was appealing; it made sense to people who couldn’t understand how God could die on a cross. Throughout the Christian world, Arianism spread like wildfire.

At the same time, God was raising up a river to put that fire out. It came in the form of the two men we remember today, Basil and Gregory. Basil was born in what is now central Turkey in the year 330 AD; Gregory was born in the same area nine years later. Both left their native land to go to Athens where, as Gregory would later write,

We had come, like streams of a river, from the same source in our native land… and were now united… as if by plan, for God so arranged it.

When, in the course of time, we acknowledged our friendship and recognized that our ambition was a life of true wisdom, we became everything to each other: we shared the same lodging, the same table, the same desires, the same goal. Our love for each other grew daily warmer and deeper… We seemed to be two bodies with a single spirit.

What united them was their common love of Christ. In the gospel the priests, Levites, and Pharisees also had ambitions; ironically, although Wisdom Himself had dawned upon the world and was so near them, they lived in the darkness of self-absorption and wished only to see that He satisfied their requirements. Unlike them, Basil and Gregory took to heart John’s words when he said, let what you heard from the beginning remain in you. From childhood they were taught the truth about Christ and sought to ensure that they satisfied His requirements. They asked questions of the faith only to see where their own understanding was darkened and prayed that Christ would shed His light upon them.

United in this purpose, both men poured themselves into their studies and infused their knowledge with the grace of ordination. Gifted by God as powerful writers, orators, theologians, and shepherds, they fearlessly and eloquently defended the Church against Arius and all who opposed the truth that Father, Son, and Holy Spirit are a perfect Unity. As Patriarch of Constantinople, Gregory presided over the Council of Constantinople in 381, which completed the Nicene creed that we recite every Sunday. Not only that, both men wrote masterpieces of theology that are studied and used to this day. 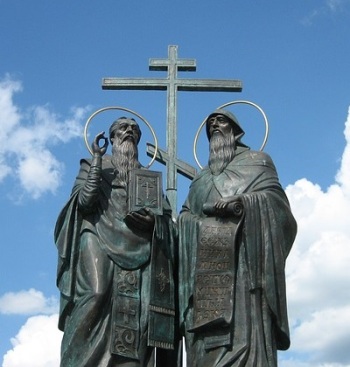 Saints Basil and Gregory can teach us many things, but today we focus on two. First, they teach us that faith in God requires true humility. Heresies are born from the pride that sees ourselves as the measure of all things; that interprets our failure to understand the truths of the faith to mean that the truths are wrong. True humility is as John admonished us, to remain in him; to see that God is the measure of all things and that our inability to understand means that we still have work to do. Second, in these days when the word “love” is so easily limited to physical expressions of self-gratification, the love of Basil and Gregory is a shining example of the most uplifting, life-giving love possible between people. This is the love that is modeled on God; that seeks only the good of the other; that finds its union with others in the heart and soul because that is where God dwells, and God is love. This is the love where heart speaks to heart and says, “I want for you what God wants for you.” My prayer is that all of us come to have that love for one another. What a world this would be.

Saints Basil and Gregory, pray for us.