Awhile after my father died, my mother asked if I would help her sort out his things. As I took some clothes out of his dresser it struck me; they still smelled like him. It was as if my father was right there. It took me several minutes to regain my composure.

Scientists have known for years that the sense of smell is intimately tied to memory and emotion. In fact, smell is the only sense that works directly with the area of the brain that controls emotions. We’ve all experienced it; no matter how far away or far removed we are from a certain time, the aroma of something – perhaps a certain food, a perfume – can bring it all back again. It is if we are there.

In the gospel we see how one of the sisters of Lazarus gave to their home a sense memory of our Lord: Mary took a liter of costly perfumed oil made from genuine aromatic nard and anointed the feet of Jesus and dried them with her hair; the house was filled with the fragrance of the oil (John 12:3).

This is significant on many levels. First, it is the perfect counterbalance to the family’s recent experience at the tomb of Lazarus; the foul air of death is literally blown away by the fragrance of new life found in Christ. But second, this perfume is costly; the price of victory is high. As if she senses that his enemies are as near as Judas and plotting his demise, Mary anoints not the head of Christ the King but the feet of Christ the Servant which shall soon be pierced with nails and placed in a tomb. Finally, it may seem odd that Mary wipes away some of the perfume with her hair but I see in it a sign of her devotion; a way to identify herself with Christ and his sacrifice, personifying St. Paul’s meaning in 2 Corinthians when he said, we are a fragrance of Christ to God among those who are being saved and among those who are perishing (2 Corinthians 2:15). 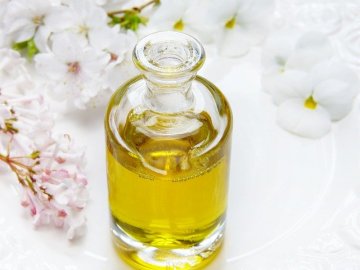 There is an ancient rabbinic saying that “the fragrance of a good perfume spreads from the bedroom to the dining room; so does a good name spread from one end of the world to the other.”1 As Mary filled her house and her hair with the fragrance of Christ, so may we fill the world and ourselves with his holy and glorious Name. And may be as untiring and devoted as she, willing to sacrifice whatever is costly to ourselves to do it. There is no greater identification with Christ than this, as St. Paul knew when he prayed that we may be imitators of God, as beloved children; and walk in love, just as Christ also loved you and gave Himself up for us, an offering and a sacrifice to God as a fragrant aroma (Ephesians 5:1-2).