The Call of Simon: Thursday of the 22nd Week in Ordinary Time

Put out into deep water and lower your nets for a catch.

I remember once talking with a man about the diaconate. When I asked him if he would consider serving Christ as a deacon he shook his head and said, “No.” When I asked why not, he replied with an embarrassed laugh, “I’m not worthy of anything like that!”

People tend to associate the call to service with their own sense of worthiness. Simon himself said to Jesus in today’s gospel, Depart from me, Lord, for I am a sinful man (Luke 5:8). Even Moses could not approach the Most High without the proper purification (Exodus 40:35).

Moreover, people also tend to avoid growing closer to Christ and his Church due to their own sense of unworthiness. Some come to Mass but refuse to go to Confession because they believe they are unworthy of forgiveness; others avoid the Church entirely because they feel unworthy to approach God at all.

But worthiness is never the issue. When the man told me that he wasn’t worthy of a calling to the diaconate, I replied, “That’s right. You aren’t.” As I hoped, that got his attention so I continued, “No one is. I’m certainly not! The call to serve isn’t about worthiness; it’s about putting our reservations aside and casting out into deep water.”

Simon had worked all night and caught nothing. He was probably tired, irritable, and not inclined to go anywhere but home. However, the man who asked him to cast out in deeper water was the same man who had just healed his mother-in-law (Luke 4:38-39). Simon didn’t know Jesus very well yet, but he knew there was something about him that demanded attention. Despite his reservations, he obeyed. We know the result; they caught a great number of fish and their nets were tearing (Luke 5:6).

God gives so abundantly not because we are worthy of it but because he loves so abundantly. While his love demands nothing, it does request that one thing over which he gave us total control: Our own free will. When we place our will in God’s hands, especially in the face of doubt, fear, or reservations, our Lord will never be outdone in generosity. 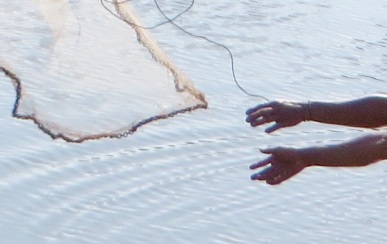 It was Simon’s willingness to put out into deep water and lower his nets despite his reservations that yielded him not only an abundant catch but more importantly the grace to see that the one who sent him was not to be called “Master,” but “Lord.” This is the same Lord before Whom we kneel as we say, “O Lord I am not worthy that you should enter under my roof, Speak but the word and my soul shall be healed.”

2 responses to “The Call of Simon: Thursday of the 22nd Week in Ordinary Time”