What Can I Teach Him? St. Joseph, husband of the Blessed Virgin Mary

In one of the many films about the life of Christ, there is a moment that I find particularly poignant and relevant when contemplating St. Joseph. While Mary and Joseph are resting on their way to Bethlehem, Joseph contemplates his impending fatherhood by looking at Mary and wondering out loud, “What can I teach him?”

We should take a few minutes to contemplate that question for ourselves. If we were Joseph, what would we teach Jesus?

First, we would teach him about our family. He would learn why we are called sons of David. The family tree given in the gospel of Matthew traces his line through the great kings David and Solomon, all the way back to Father Abraham, who first held the promise of a land flowing with milk, honey, and countless descendants. Of course, the family tree also contains some of the biggest scoundrels ever to call themselves king, as well as a few women whose histories would make for some interesting stories around the campfire. Most of all, we would teach Jesus that, apart from those few exceptionally good or bad people, his ancestry is filled with people like us; the ordinary, whose lives may seem to pass in obscurity but who also have known love and loss, the best and the worst of times, and have spent their lives hoping in the promise once given to our ancestor David.

Second, we would teach him about the faith of our people. There are so many stories to tell him: Creation, Noah, Abraham, Isaac, and Jacob. We would tell of Jacob’s son, our namesake, Joseph; of his exploits in Egypt; how he was able to interpret dreams and through that gift keep the people fed and himself prospering. Imagine how the eyes of Jesus would light up when we talked about dreams, for that would lead us to talk about our own dream, when the angel said you are to name him Jesus. On our way to the Temple in Jerusalem we would sing the psalms and talk about the feasts, especially Passover and Unleavened Bread. We would remember Moses and Aaron, the plagues, the angel of death, the Red Sea, the pillar of fire; the wandering in the desert; the promised land and then his own namesake, Joshua. From all this, young Jesus would learn that, despite the tendency of some to stray from or misinterpret the faith, we are a faithful people who love God and desire to serve and be faithful to him.

Third, we would teach Jesus the value of labor; that God himself worked when creating the world, and that we work to maintain and make a living from it. We would teach him that our work as handymen and woodworkers not only puts food on our table but is a great service to our people; we make the yokes for their oxen and the tools for their trades. We would teach him that to do this job he will have to learn how to get along with all sorts of people; the demanding customers who are never satisfied with our work; the destitute who cannot afford it; those who are grateful, and those who never say thank you.

In his divine wisdom, who else would God choose but a man who already has all these things ingrained into his nature; a man capable of teaching his child simply by virtue of his life? We don’t have to guess; he chose Joseph, of the house of David, a man of deep faith and resilience, worthy of the greatest task he could ever undertake. 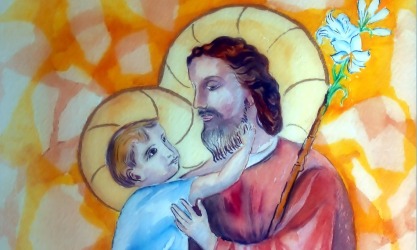 Of all men, Joseph was chosen to tell the Son of God the human story of the people he created; to teach him about the faith that he gave the world; to show him what it meant to fully engage his world as a man of his times; how to work, to worship, to provide for others, to give of himself, to weep, to laugh, to live. Only Joseph had the incredible privilege and the awesome responsibility of teaching the Son of our heavenly Father how to be the son of a human father as well.

St. Joseph, pray for us.

I am a life-long Catholic, father of 4, married many years. I serve as an ordained Deacon for the Diocese of Rockford, IL, at St. Elizabeth Ann Seton parish in Crystal Lake, IL. I was ordained in 2014.
Previous Post
Next Post