Sent: Monday of the 28th Week in Ordinary Time

One day at a high school for wealthy children in India, a teacher happened to wander outside the school’s gates. In the poverty and misery that surrounded her, this young nun saw and heard something greater than the wisdom of Solomon. Saint Teresa of Calcutta spent the rest of her life serving the poorest of the poor in the gutters and slums of India and the world.

In another part of the world, a young Frenchman rejected the faith of his family and indulged in a carefree life of luxury. After squandering a huge inheritance he entered the military, who threw him out. His second attempt at military service drew him into contact with the people of the Sahara; in their poverty and solitude, this man saw something greater than the Temple. He went home, rediscovered his faith, became a priest, and returned to Africa. Blessed Charles de Foucauld spent the rest of his life ministering to the Muslims of the desert.

It would be hard to find two people more different at the outset, yet how similar they became. One a hedonistic playboy looking out only for himself; the other a consecrated religious doing what she thought God wanted her to do. Both were called by Christ to a life they would have never imagined and in the end would never relinquish. Their responses transformed them and transformed the world.

Their destiny points to the choice that Jesus lays before us. Either we can be part of the “evil generation” that demands the certainty of miraculous signs and rejects the certitude of faith, or we can use our God-given faith given to discern the only sign that matters. Jesus called it the sign of Jonah, but in reality it is his own true presence, for he is the Temple not made with hands; he is Wisdom itself. 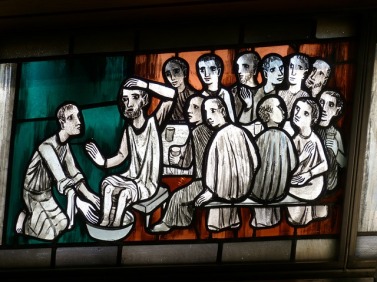 This is what the saints and the blessed have discovered. The greatest good in life is to see and serve Christ; that is what gives our life its ultimate meaning. However, we will never be able to do that until we see Christ in each other and become Christ for each other. St. Paul knew this; that is how he could write that the grace of apostleship is found in the obedience of faith. By faith we believe that God loves everyone and that we are to love as God loves, but it also teaches that the people who we think are least deserving of our love are the ones most worthy of it. Thus, obedience to the faith means that as apostles we are sent to be Christ and to find Christ in everyone, even those we find hardest to serve. Only grace can provide the humility and openness to vulnerability that can empower us to do the work for which we have been sent.

That brings us to the final point. Where have we been sent and who are we to serve? Consider this thought from Blessed Charles de Foucauld:

It is not necessary to teach others, to cure them or to improve them; it is only necessary to live among them, sharing the human condition and being present to them in love.

Put that in the context of this thought from Saint Teresa:

It is easy to love the people far away. It is not always easy to love those close to us. It is easier to give a cup of rice to relieve hunger than to relieve the loneliness and pain of someone unloved in our home. Bring love into your home for this is where our love for each other must start.