Our Mother, Clothed With the Sun: Feast of Our Lady of Guadalupe

The book of Revelation is apocalyptic literature. This was a genre used in and around the time of Christ. It is overloaded with rich and mystical symbolism; a single image may represent multiple things. Further, the imagery can be violent and warlike, even though its ultimate message is one of hope and peace.

In the passage of Revelation chosen for today’s feast lurks a huge red dragon. The Hebrew word translated as dragon can also mean “serpent” or “sea monster” and is thought to represent the devil and the forces of evil, ready to make war against the Christ and his Church.

In late 15th century Mexico, the Spanish conquistador Cortez saw echoes of that dragon in the violent, warlike Aztec religion. Every year, thousands of people were sacrificed to appease its bloodthirsty gods. In 1487, the dedication of a new pagan temple saw 80,000 people sacrificed in just a few days. As if that weren’t bad enough, the dragon’s shadow also appeared in some of the immigrants to the new world, who spoke of peace but practiced avarice, treating the Mexicans and their land as things to be exploited for personal gain. Even some within the Church hindered the spread of the gospel by refusing vocations from the local community; Catholic Mexicans were not allowed to minister to their own people. It’s not hard to understand why many resisted converting to Catholicism.

If a reflection of the dragon could be found in the new world, so could a reflection of the woman. In 1531, a mystical apparition identified herself as “the ever Virgin, Holy Mary, the Mother of God” to a middle-aged Mexican man named Juan Diego. In Revelation, the woman was clothed with the sun, the moon under her feet, and wore a crown of stars. The apparition at Tepeyac is also rich in symbolism, but it is all Aztec. The woman stands in front of the sun, eclipsing the Aztec sun god; her foot rests on the moon, dominating their chief god, Quetzalcoatl; her mantle holds the stars, which they worshiped. Yet, the woman is not divine; her hands are in a posture of prayer and she looks down, which Aztec gods never do. She is a queen, for she wears the Aztec royal color of turquoise; a Christian, for there is a cross on her brooch, is pregnant, for she wears an Aztec maternity belt; yet she is a divine mother, for over her womb appears a four-petal flower, the Aztec symbol of a deity.

As important as her image was, her words were far more so; for what she said, how she said it, and who she said it to. She spoke in the language of the Aztecs, not in Spanish; she spoke to a simple peasant, and through him to all people; her message was one of comfort and hope: She was there; she was their mother; she held them in her arms, heard their weeping, and knew of their hardships and sorrows. Above all, she wanted them to rest assured that through her intercession they would be healed. 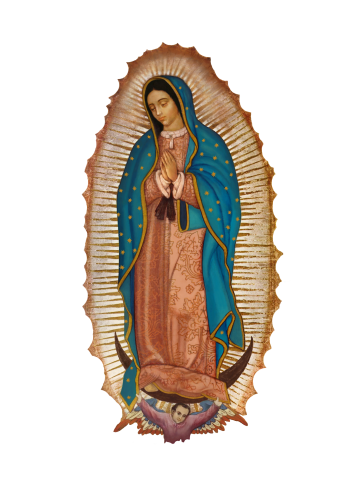 She became known as Our Lady of Guadalupe, and as word of the miraculous appearance and image spread, she became the most effective tool of evangelization that Mexico or the world had ever known. In the gospel, Mary carried the Eternal Word into the Judean countryside where the babe within Elizabeth’s womb leaped for joy; 15 centuries later, Mary’s maternal word went out into the Mexican countryside where millions leaped for joy. Conversions increased so dramatically that for a couple of years the missionaries could almost not keep up with them. More than that, the peoples’ faith was strong; to this day, the faith of the Mexican people remains vibrant, with deep devotion to Our Lady of Guadalupe.

In our own time the dragon still lurks. We do not have thousands dying in pagan temples, but we do have millions dying in abortion mills here and throughout the world. Still, the image of Our Lady of Guadalupe reminds us that the woman of Revelation is still present, still giving birth to the Church, still giving her ever victorious Son to the world. As she comforted the Mexican people, so she consoles us. She is our mother; she holds us in her arms; knows of our hardships and sorrows, and assures us that through her intercession, we too will be healed by Christ, her son.

Our Lady of Guadalupe, pray for us.